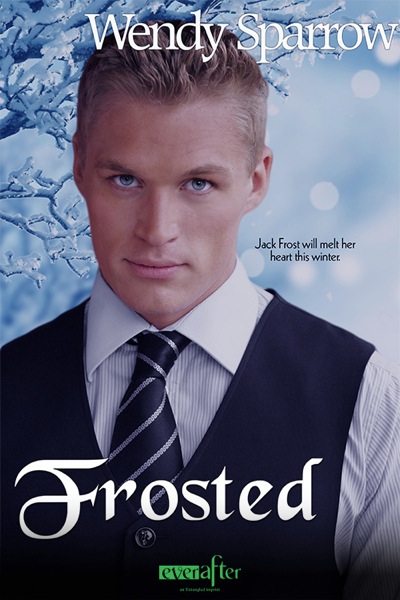 After falling through the ice one cold day, Kate is saved by a mysterious man named Jack and ends up marrying him. Come to find out she's committed herself to the king of winter himself. Now Kate has cold feet about their life together…and cold everything else.

She doesn't think Jack will miss her if she packs up and runs away to Colorado. After all, she's been in living in sunny Florida for seven years, and he hasn't managed to come see her. But Jack has one last chance of convincing his runaway bride to come back to him, and he won't give up until he breaks through the ice that's frosted her heart.

I have to start this review off by saying I'm really picky with romances. There are some things I can't stand in a romance and there are also things I have to have in a romance read. This book was pretty much an okay read for me - it had a lot of problems in my opinion, but it also had its moments.

It was mostly the characters that threw me with Frosted. Jack Frost had a lot of potential as a character - he was complicated and mysterious, but while he had loads of depth, he wasn't developed enough to keep me interested in the end. I had a similar problem with Kate. I understood where she was coming from in her decisions but it just wasn't there for me. There wasn't enough of a justification for leaving Jack in the first place when I couldn't understand why she felt the way she did - it didn't go deep enough for me. Kate's excuse is her family life making her into an incredibly independent woman who doesn't trust enough to commit to a relationship - but in the story she already mentioned she loved Jack from the beginning. The problem was that I felt I hadn't gotten to know her well enough before the story ended.

Another problem was that I found the plot really cliché. Sometimes it can come across as charming but in this case it was a little overwhelming. I knew what was going to happen from the first few pages of the book so, of course, I felt there wasn't much point in reading on in that case.

However, what I did like about this read was that the interactions between Jack and Kate were really sweet. Every time they were brought together Jack would say or think things that would make my heart melt and wish that someone would say these things to me. Part of reading a romance novel I think!

It was also an incredibly quick read. That's not always a good thing and I would have liked to get to know the characters better but it was still an entertaining read. You can literally finish it in an hour if you're a quick reader.

At home in the Pacific Northwest, Wendy Sparrow writes for both an adult and young adult crowd. She has two wonderfully quirky kids, a supportive husband, and a perpetually messy house because writing is more fun than cleaning. She enjoys reading with a flashlight under a blanket—the way all the best books should be read—and believes in the Oxford comma, the pursuit of cupcakes, and that every story deserves a happily ever after. Most days she can be found on Twitter where she’ll talk to anyone who talks back, and occasionally just to herself.

Wendy has decided to give away a lovely necklace as part of this blog tour. It's International too! If you want to check the necklace out you can see it here.

Posted by Books Glorious Books at 00:00

Wow, that's an honest review! The premise of the story appeals to me. I keep adding books to my wishlist, it's getting out of hand!

Wendy...I appreciate an honest review. I don't think I've read your reviews before. Thanks for sharing.
catherinelee100 at gmail dot com

I read your review, it make me curious with this book. Thanks for sharing.

If you're an author or publisher who would like a book reviewed please read the following review policy and email me at m-hussein(at)hotmail(.)co(.)uk

Books Glorious Books
Manchester, United Kingdom
Hi there! If you're looking to learn more about me then to put it simply I am an extremely enthusiastic reader. Books are my thing. I take great joy in buying them, reading them and reviewing them.

My blog has recently been added to Blog Nation, which is part of one of the largest networks of blog directories on the Web. Please visit my blog's personal page to vote for my blog and comment to other blog users.